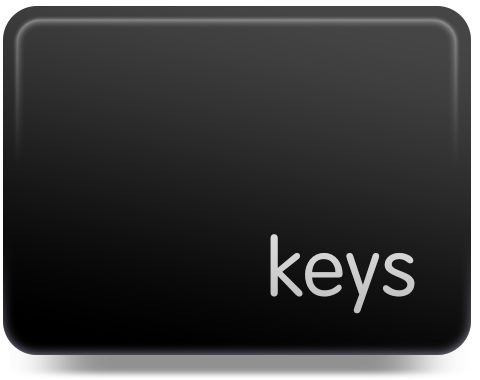 Today I’m happy to announce Keys, a Mac application that I’ve created that helps you to learn touch typing properly. It is in the App Store now (link) since a couple of days. Most of the people I’ve showed it to were quite enthusiastic about it, which was really gratifying after so much work that went into it.

Keys is a typing trainer app for the Mac. A no-nonsense, clean Mac program to help you learn typing with all fingers, and do that fast and without making many mistakes.

Touch typing means you type each key with one specific finger, and you don’t look at the keyboard while doing it. That sounds like not much, but it makes a huge difference to the ad-hoc system that many people use. Most people who don’t do real touch typing have a number of excuses and employ similar reasoning why they don’t need to or should not learn it any more. Usually they say they had a way to type that is very fast and they don’t look (much) anyway. It is quite understandable. You wouldn’t hesitate to learn this skill unless you thought you didn’t need to. I know this from first hand experience, since I learned to type only when I was working as a professional programmer for several years. But I can tell you that the difference is huge. You don’t need to take it from me, you can just read the blog post by blogger extraordinaire and Googler Steve Yegge, who ultimately conviced me with this (hilarious, lengthy) post. (It is as convincing by the argument it presents, as it is by it’s sheer length, which leaves you wondering about Steve’s typing speed.)

The main difference is that you never need to think about which finger to use to type a certain key. There are rules! Otherwise you wonder which way to divide up the keyboard, sometime use this and other times that finger. With touch typing no longer! So it sinks in to lower layers of the brain and becomes semi-automatic. That is the beauty of it. This effect makes it easier to remain in the flow, write down that email that you just formulated under the shower, or rip through the refactoring that goes through a number of files. Proper typing helps you hold that thought in you mind for long enough, until it is put down.

How does it work?

Keys introduces the keys of the keyboard in small steps or lessons, each time covering more of the keyboard. You type the text presented in the lessons and try to make as few mistakes as possible. That’s all there is to it. Over time you develop the ability to type certain keys and words without consciously thinking about it. Writing becomes less and less straining, when you don’t need to think about which finger to move and where to move it. Until your reach that goal you need some practice, and that is what the program offers. It shows you where a finger should usually rest, and how to move it from there to the right key, and it gives you lessons for training.

After a while practicing regularly, you probably want to know how you have been doing. Keys allows you to drill down into the data and learn about your performance. It shows basic numbers, like speed and error rate, and also draws these numbers over time, so that you can see how the training has been building up your skill over the last few training sessions.

Visualizations: Look at your typing

For the overly curious or for visulization lovers among you there still is one more part in the lesson review, a keyboard heat map, which shows values for individual keys in comparison to one another by assiging colors. Switch it from showing speed to error rate to keystroke count, and compare the current training with the last five or last 30 attempts.

That is it, and it is all you need to learn typing. The rest is steady practice. And you will discover, after a while, how much better correct and skillful touch typing is, even in comparison with you probably impressivly fast ad-hoc system, you have been cultivating over the years. Because that’s what I experienced when I learned it. Also, will soon be faster and less tiring. Proper typing is actually very delightful, like any well-developed skill. But that is material to write about on another day.

Keys is available through the Mac App Store for US$ 19.99 as a limited introductory offer. There you also find screenshots. Currently Keys only supports US keyboard layout, but other layouts are planned. Highest on the list is German, and I’d love to do a Dvorak layout. Send my you wishes on this, I’ll make the decision mostly on what is most desired.